The Science of Wormholes, Portals, and the Guardian of Forever 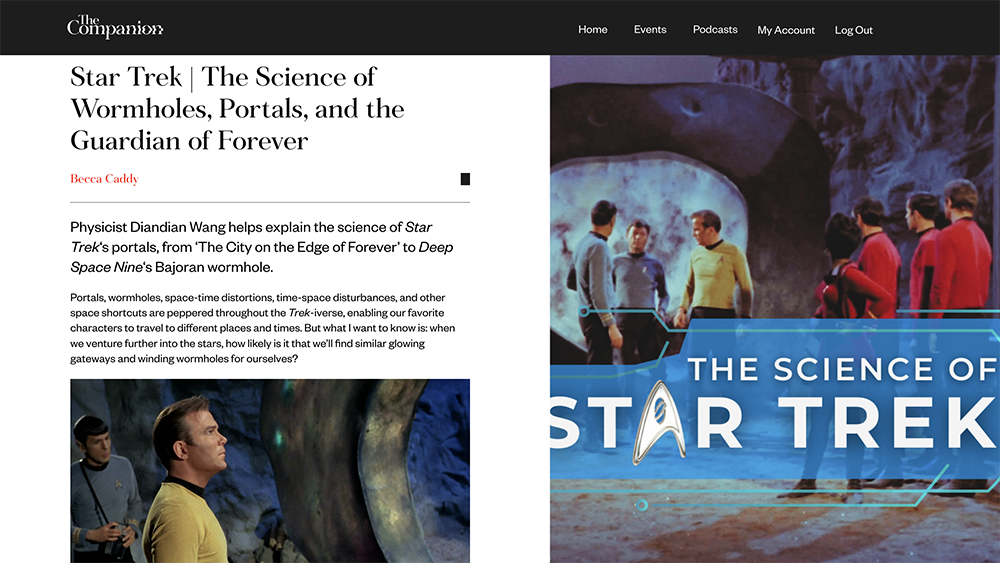 Physicist Diandian Wang helps explain the science of Star Trek‘s portals, from ‘The City on the Edge of Forever’ to Deep Space Nine‘s Bajoran wormhole.

Portals, wormholes, space-time distortions, time-space disturbances, and other space shortcuts are peppered throughout the Trek-iverse, enabling our favorite characters to travel to different places and times. But what I want to know is: when we venture further into the stars, how likely is it that we’ll find similar glowing gateways and winding wormholes for ourselves?

Portals are central to many Star Trek stories. One of the earliest, and most memorable, shows up in Star Trek: The Original Series. “Are you machine or being?” James T. Kirk (William Shatner) asks the large, glowing ring-shaped thing in front of him in possibly the greatest episode of The Original Series ever written: ‘The City on the Edge of Forever’ (S1, Ep28).

“I am both… and neither. I am my own beginning, my own ending,” replies the ring-shaped thing, which Kirk learns is called the Guardian of Forever, a portal that shows past events on its edges – I like to think of it as one of those Amazon Echo Show smart screen devices but much bigger with added time travel specs.

In a rather dramatic fashion, we soon find out that the Guardian of Forever doesn’t just display scenes from different times and places but can transport people to them. Because as moments from Earth’s past flash before the away team’s eyes, a delirious McCoy (DeForest Kelly) runs through the portal and is whisked off to 1930s New York, soon followed by Kirk and Spock.